I’ve got to shout-out my mate Marcelino who’s had his challenges in trying to break sub 3 but he finally did it in Berlin running a time of 2:58:51, I’m really happy for him as I’ve seen the effort he’s put in.

Also I’ve got to shoutout Amrit who crushed it running a PB of 2:51:25!!! This guy has put the work in to get this good.

There’s many a morning when my alarm goes off am that I want to hit snooze and go back to sleep. But I’m inspired by the effort that Karen puts in. On her instagram stories she posts when she’s up and out training in the early mornings, it’s a reminder to me that she’s putting in the hard work whilst, parenting and juggling work. If she can do it, I need to get my ass out of that door. She did an amazing job and ran a PR of 3:02:51. 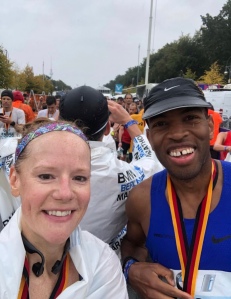 There will be people that reached or missed their goals. For those that missed them on a wider level, as people we feel similar feelings. But spare a thought in the grand scheme of things for Kenenisa Bekele who missed out on the world record in Berlin by two seconds finishing in 2:01:41. This really puts my disappointment in perspective imagining the what if’s going through his mind post race…

The remainder of this article will cover race, the lessons I learnt and the strengths that I revealed.

Pre race I practised with my kit and nutrition. I got the opportunity to try out the new Maurten caffeine gel, and it worked well for me in the race. 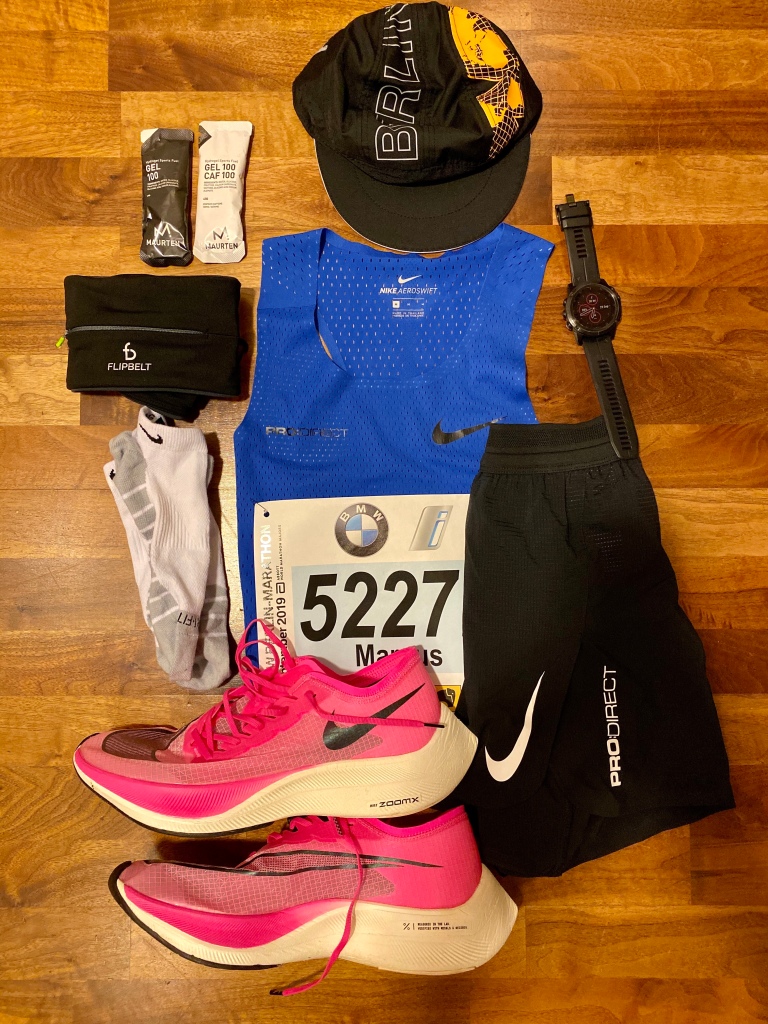 I’ve also being using Nike Next% from Prodirect Running which is an amazing race shoe, which I previously reviewed.

I was really focused on my race segments, repeating my mantras and staying in the moment, so much of the race was a blur. However these are the memories that stuck out.

The first half the weather was perfect, it was cool and it was coupled with a light drizzle of rain. 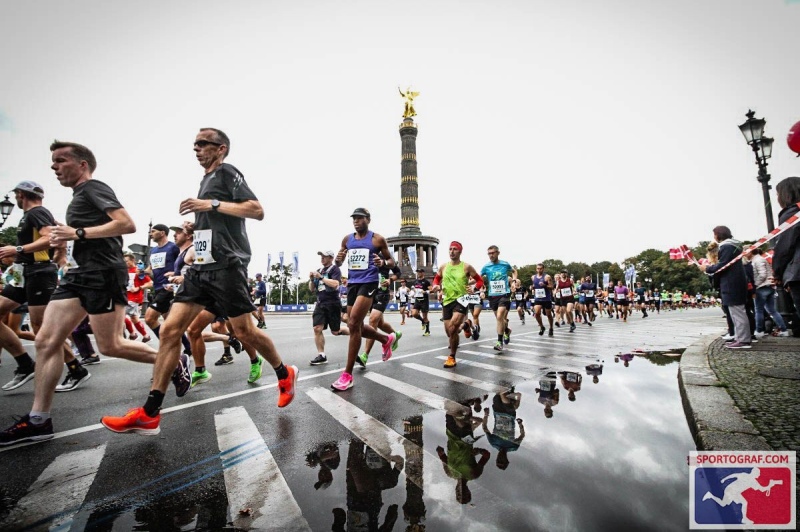 The pre race predictions of rain were correct, the final 15k I was running into head wind, and the second half the rain picked up. This made running the corners slower as I was exposed to the elements. But during the race the weather wasn’t a problem as I was moving, so it was fine. But once I finished and I was walking back to my hotel in my poncho, my teeth were chattering and I was shivering.

The water stations were carnage, not because of how it was setup by the race organisers, but solely down to the other runners. Here’s my water station etiquette 101:

⁃Discarding of gels and cups: The race organisers clearly state put it in the designated areas, however cups, gel wrappers, banana skins etc are tossed randomly all over the road. This creates a trip hazard, plus you have to concentrate more on dodging hazards rather than looking up;

⁃Sense of awareness to your fellow runners: When runners abruptly stop, or sharply cut across your line to get water, or barge other people (not always on purpose). Essentially everyone needs to pay attention to themselves and other people, so we can all finish the race safely.

⁃ The man running in speedos. I think he was expecting to take a right turn out of the rain, and hit the beach and bask in warmer climates;

⁃ Then there was a guy running next to me, who was making dog barking noises. I thought he was calling a pack of dogs mid race;

⁃ The spectator who decided to stroll across the runners path, without any sense of urgency hellbent on bumping into anyone.

Ok back to the race… It’s a flat and fast course. It’s not the most exciting visually bar the iconic finish running under the Brandenburg gate.

The crowd support was very subdued for the majority of the race. Whilst it was raining which makes it not a very pleasant experience to stand in. I would point towards Boston 2018, the weather was biblical and the support from the crowd who were getting soaked and freezing was incredible. Maybe it’s a little unfair to compare but the crowd support from the three American majors is on another level.

But I’m not ending on a negative, I spotted some friends in the crowd. Thanks to Martina and Sandra for the support. Standing in the rain cheering isn’t fun, but seeing people I knew when I was abroad really lifted me. Thank you! Ironically these are the only photos of me smiling, none of the official photos show any hint of a smile…

And to give some perspective in fairness my complaint is minor in comparison to what happened recently to Dina Asher-Smith, who won 100m silver in the World Championships in Doha setting a new British record of 10.83, she grabbed a Union Jack flag and did a lap of honour, in a 40,000 seat stadium to approximately 1000 spectators and journalists.

Huge respect to doing this, in a practically empty stadium. What she achieved was incredible but she was robbed of sharing her moment with the supporters.

What lessons did I learn

So there’s quite a few, but the one I’d focus on is this, the management of effort and getting the balance right between trusting one’s self and using your watch as a guide.

The watch is a great tool for my workouts, but retrospectively I was placing more emphasis on judging my effort (throughout the race) externally through my watch, rather than trusting myself.

Whilst I’m happy I ran a disciplined race, I’d like to work on getting a better balance of trusting my perceived race effort against the time reflected on my watch.

What strength did I reveal

Pre race I had a serious health concern, and an Achilles issue. Everything was up in the air until I had clarity and it really impacted my training, I wasn’t achieving my workout targets. Frankly it wasn’t as good as my training block for Manchester.

My coach gives my training on a weekly basis. I could tell he had scaled some back my workouts, when I compared it to my Manchester training block. Whilst my ego wanted to tell him to give me harder sessions, in reality I knew he was doing the the right thing and that I didn’t have enough defence to say the opposite.

Look no one has a perfect training block, the fact that your pushing yourself means that you’ll have near misses.

If I judge my training by the hard numbers, my training didn’t suggest a sub 3 marathon, as there was a key section of training that I wasn’t kicking on with in my workouts.

Once I got my health all clear my training improved. Being grateful for my health, it was really freeing, and it helped with my last running sessions. Was it too late maybe, but whilst you can judge numbers and facts, you can’t judge what’s in your heart, which makes my race finish time a huge plus.

Another big factor was even though my running speeds were inconsistent, I was running consistently building on previous training blocks and that helped come race day.

Before the race I worked with Duncan to work on race strategies. Whilst I won’t go through them all now, a key technique Duncan suggested was writing one thought on tape attached to my Maurten gel.

For each segment, where I’d take a new Maurten gel, I’d use that thought to keep me focused on a different aspect of my why for being out there. For that segment, I’d go over that thought, it kept me in the moment, and it gave me strength when I needed it.

Whilst I didn’t hit sub 3 this time, I have more confidence that it’s in reach.

My next marathon is the 2019 New York City Marathon, where I go again.

It was great to catchup with so many friends racing over the weekend. 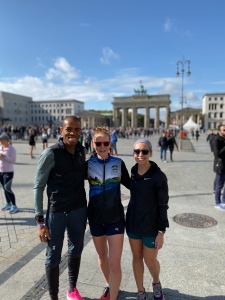 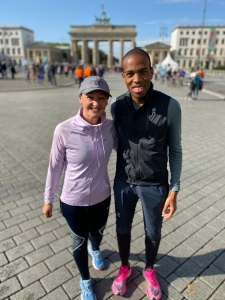 and shoutout to Adrian / Rush and the team at RD physios