As part of my blog I (MM) believe it’s important to share common and similar experiences. Through the wide reach of the fitness community across social media, I’ve been able to connect with Tom (TL) who’s love of travel and running has created an amazing story across his social media profile. I’m really inspired by his journey and what he is achieving.

MM: How did you get into running and why are you running a half marathon in each of the 50 American states?

TL: The story of how I started running is actually pretty unusual: I did it to impress my boss! When I was in my early 20’s I got my first “big” job after college and my manager was really into running an fitness. He used to run three miles during his lunch break every day and one day he asked me if I wanted to join him. I said yes – partially because I was genuinely interested in running, but also because I wanted to be a good employee. The first time I tried to run, I made it about half a mile and had to stop and walk. But I enjoyed it and wanted to get better so every day I would go out again and try to make it a little bit further. Before I knew it I could run the entire three miles. A few months later, I saw that there was a local 5K by my house so I decided to sign up. As soon as I crossed the finish line I was hooked on racing. Interestingly, my old boss and I don’t work together anymore but we’re still close friends. Whenever we get together he always asks about the races I’m training for.

My goal of doing at least a half marathon in all 50 states was something that kind of evolved over time. The first half marathon I ran was in Nashville, TN in 2006. I’m from Chicago but I traveled there for the race and to visit some friends. I did the Chicago Marathon later that year and then traveled to Phoenix, AZ for another half a few months later. Over the next few years I started to look for opportunities to run in interesting places but didn’t have any particular longer term goal in mind. Eventually, it occurred to me that I had run in several different states so I figured that doing one in all of them would be something fun to work towards. I’m up to 42 States now . If things go well, I should be able to finish all 50 by the end of next year. I always tell people that the best way to explore an area is to do a race in it. Race directors usually design their routes to bring runners past the most interesting landmarks and you usually get opportunities to see things a lot more closely if you run past them than you would if you were driving. It’s been an amazing journey to run in so many different places and see so much of the US.

MM: From your half marathon goal. What was your worst and best races and what did you learn from them?

TL: It’s so hard to pick a best race because every race has a unique set of features that defines it. Whenever someone asks me what my favorite one is, I usually try to break it down by category. A few examples:

I don’t think I really have a worst race. There are some that I probably wouldn’t be interested in running again but even those had at least a couple bright spots. That’s not to say that all of my races have been awesome or anything like that…. But something I’ve learned over the years is that the toughest races usually end up making the best stories later. The toughest Half Marathon I’ve ever done is the Golden Leaf Half in Aspen, Colorado. The elevation at the start line of this race is 8500 feet and it goes up to 10,000 feet within the first mile and a half. Being from Chicago, I’m used to running at sea level, so the beginning of this race felt like jumping on a treadmill with the grade to 11% and then running a mile and a half with only a fraction of the oxygen my body was used to breathing. The next few miles are up and down on a super technical single track trail that literally runs over the top of a mountain. Mile 7 through 11 are downhill but that’s not necessarily any better because the course drops over 1900 feet on the same single track trail over those four miles. Things level out for the last two miles, but by the time I got to that point I felt like someone had spent the last couple hours pounding my knees with a sledgehammer. But here’s the thing – the course is stunningly beautiful. It’s during September, when the leaves on all the Aspen trees that cover the mountains in the area turn bright yellow. The contrast between their leaves and the dark green spruce trees that are also common in the area makes it look like someone poured liquid gold over the tops of the mountains. That’s what you get to see throughout the entire course. Also, for as tough as that race was, as soon as I staggered across the finish line, I felt a sense of pride for being able to do something like that. If I had known how tough that race was going to be, I might not have signed up for it out of fear that I might get hurt or not be able to finish. But there I was, standing at the finish line. The only way you’ll ever know what you’re capable of is to push yourself past whatever you think your limits are. So for as challenging as that race was, I still say it was a great experience.

MM: You have a great social media presence, especially on Instagram. If you could accomplish anything via social media what would it be?

TL: I want to inspire people. I’m not famous and I’m not an elite runner, but I’ve had a ton of interesting experiences that I wouldn’t have had if I had never started running. So I like to share those experiences and try to convey the message that if I can do these things, then so can anyone else.

MM: Your daughter also enjoys running. As a parent how do you encourage Sara to follow her own running path?

TL: I try to encourage Sara to be active, and I want her to develop a mindset that getting out and doing physical activities is fun, but I also want her to develop a wide variety of interests and choose her own paths in life. Besides being a runner, she’s also an amazing gymnast and she’s learning to sing and play guitar… and she co-authored my second book. She and I enjoy running and doing races together and I hope that’s something that we’ll be doing for a long time, but Sara will always get to decide what direction she wants her life to go in as she continues to grow.

MM: Injuries are apart of running, but not always easy to deal with, what advice would you give to runners for coping with injuries?

TL: It might frustrate some people to read this but for all the running I do, I’ve never had an injury that’s caused me to miss more than two weeks of training (knock on wood). I think the reasons are that I try to listen to my body and rest when I need to and I also include quite a bit of cross training and strength training in my routine. When it comes to coping with injuries though, I think the key is to give your body the time it needs to heal, do what you can to maintain your fitness while you aren’t able to run (swimming, biking, strength training, etc…) and try not to get too discouraged. Time heals everything.

MM: What is your favourite pre race meal?

TL: The day before the race I usually have pasta for lunch and then a big salad with plenty of vegetables for dinner. On race morning I like to eat something light like an apple or a banana. I have a sensitive stomach so it can be a tricky balance between making sure I eat enough to fuel my body without giving myself stomach issues during the race.

MM: What are your favourite running books?

TL: There are two that pop into my mind right away:

Marathon: The Ultimate Training Guide by Hal Higdon was the first training book I ever read. To this day, I still refer back to it and use Hal’s programs as a base when I build a lot of my training routines.

Ultramarathon Man by Dean Karnazes inspired me as a runner, and it also to inspired me to write my first book. 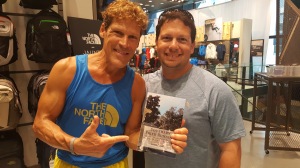 MM: From your experiences running, what do you believe to be true?

There’s no limit to what you can do if you set your mind to it.

Runners are some of the best people you’ll ever meet. I’ve made some great friends since I’ve become a runner and their stories never cease to amaze me. I love it when people come to say hi to me at races after recognizing me from Instagram or one of my other social channels.

I’ve traveled so much for races and seen so many different places that I no longer have the words to describe how beautiful the world truly is.